It’s been a while since we last reviewed a Performax Labs product. They’ve had many products in the works; some new, and some reformulations on old fan favorites. Performax Labs’ newest product to hit the market is also their first protein product to hit the market! In similar fashion to their other product names, we are excited to introduce IsoWheyMax, a 100% whey protein isolate packing an impressive 24g of cross-flow microfiltered protein per scoop. In addition to the high-quality whey, Performax labs has a couple of other goodies that separate it from your more common proteins on the market! Couple that with a unique variety of flavors and it looks like Performax Labs has another winner on their hands. If you’re already a familiar fan of their other award-winning products like HyperMax, VasoMax, or their 5-star fat burner OxyMax, you’re going to want to check IsoWheyMax.

Keep scrolling to see our review of IsoWheyMax and why were starting out 2020 with one of the hottest protein products to hit the market!

Mixability: In classic Performax Labs’ fashion, they nailed the mixability. We used a scoop in 8 oz of water, dairy milk, and almond milk. After a few quick shakes in a shaker cup, the entire mixture was dissolved into a smooth creamy texture. IsoWheyMax has almost no grittiness and resembles a milkshake; thicker with milk and thinner with water and almond milk. When blended, IsoWheyMax creates a lot frothier beverage than others we’ve tried before. Whatever you’re blending it with, IsoWheyMax surely delivers the Performax Labs mixability standard.

Vanilla Cake Batter: Cake batter flavors, especially vanilla can often be difficult to nail and frequently have an overly sweet or chemical taste to it. It’s often very difficult to strike that perfect balance between the vanilla and batter flavors. IsoWheyMax has a very light cake batter flavor that really emphasizes the vanilla. The product is sweetened with sucralose but does not have any sort of chemical flavor to it. This flavor is on par with others in the industry and if you’re a fan of a lighter flavor profile that won’t linger on the tongue or sit heavy in your stomach, this will be perfect for you.

Chocolate Milk: The name says it all—not to be confused with milk chocolate. Performax’s Chocolate Milk flavor is very similar to a 1% fat chocolate milk. It’s again, much like the cake batter, lighter than we expected and the flavor is on point. There is no chemical aftertaste and this one tastes just like a malted chocolate+cocoa powder beverage mix. This is one of our favorite chocolate milk flavors we have ever tried and reviewed! 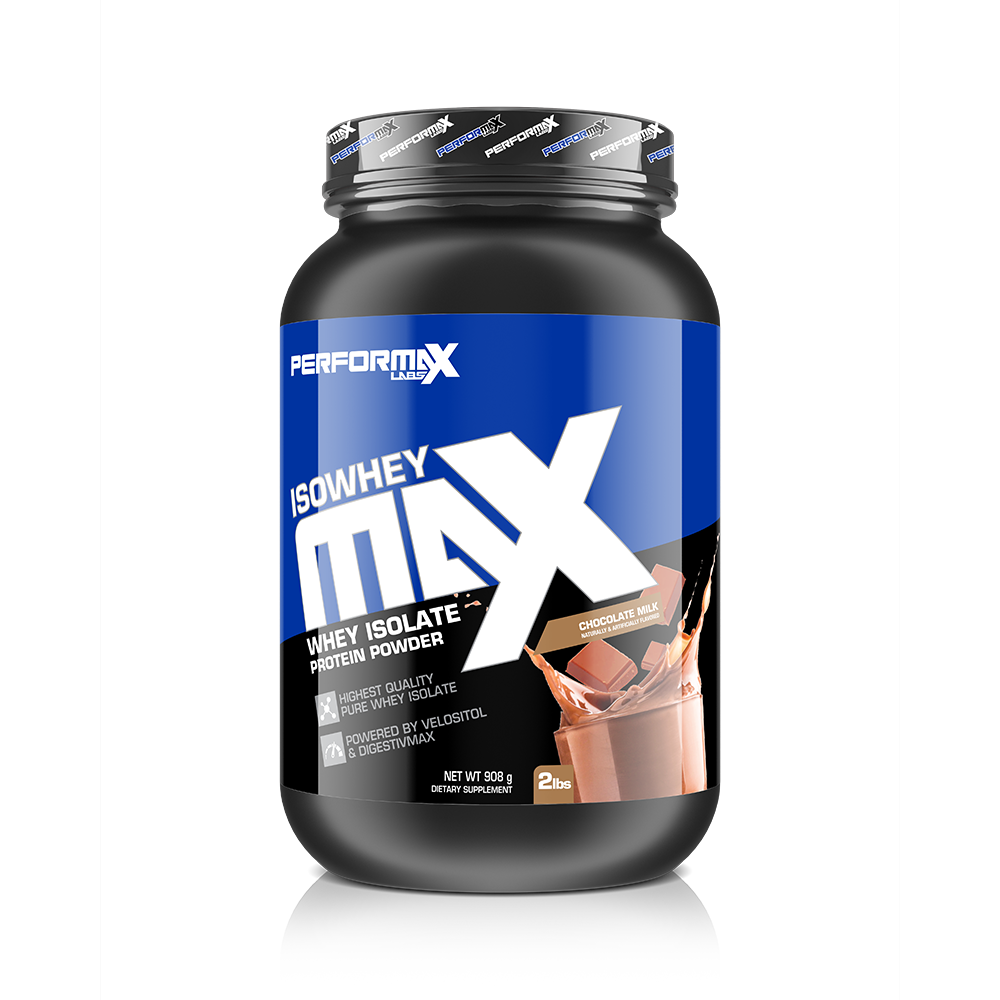 Ingredient Profile: With protein powders, there isn’t typically much to cover in terms of ingredients; but luckily IsoWheyMax is an exception here! We’re going to take a look at the Supplement Facts and then dive in to the extra goodies Performax Labs included in IsoWheyMax to help set it apart from others in the industry.

A quick look at the label will show you some commonplace ingredients and nutritional facts- IsoWheyMax has 1g of fat, 4g of carbs (only 1g of sugar!) and 24g of protein. Next, youll notice that IsoWheyMax lists their electrolyte and mineral complex which is much more impressive than other proteins on the market, and even better than some intra-workout “electrolyte” beverages we have seen! Next up on the supplement facts you'll see that that it lists the total protein content and what it yields. The 26.5g of Cross Flow Micro &Ultra Filtrated Protein yields 24g of protein meaning about 90.5% WPI (Whey protein isolate). The Stars of this particular protein powder product, however, are two special ingredients not very widely utilized, but really set IsoWheyMax apart from 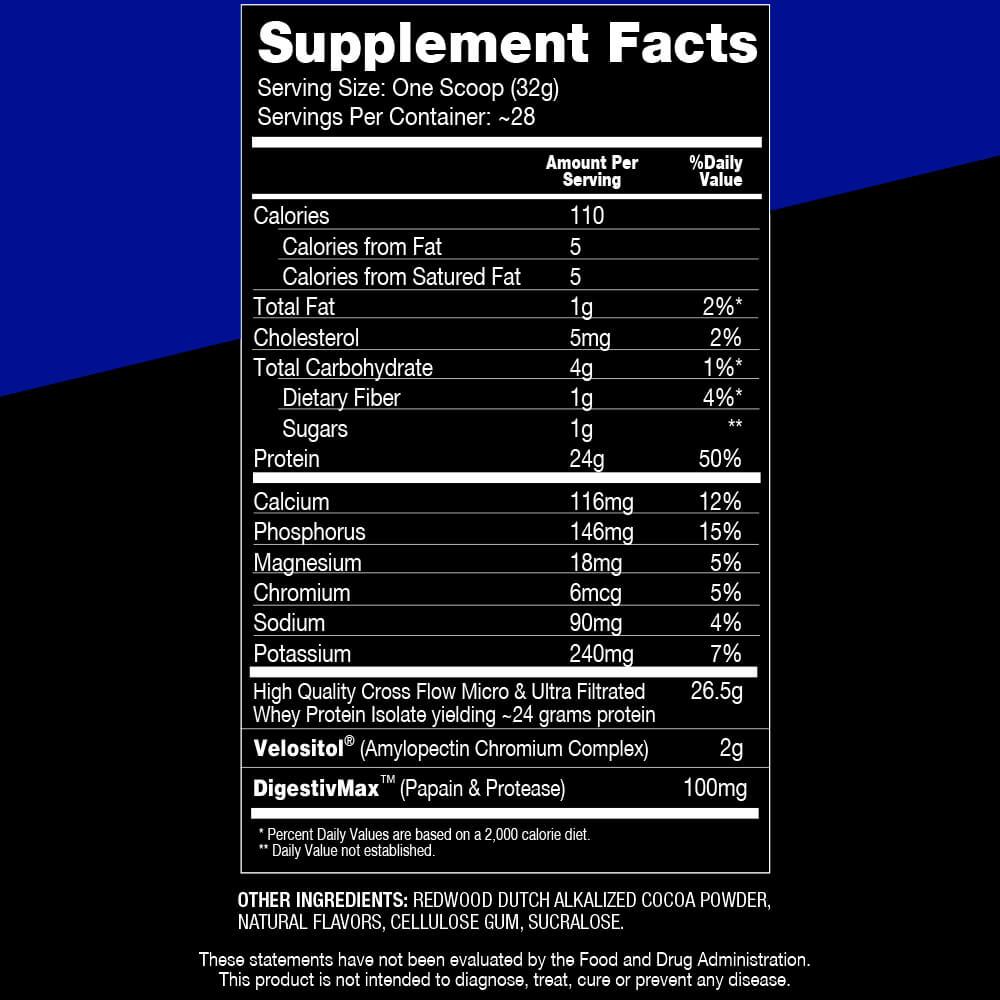 Velositol-2g: Velositol is one of the most revolutionary ingredients to hit the protein market in some time. With over 50 patents and applications, Velositol’s science is difficult to argue! Studies suggest that Velositol has the ability double the muscle protein synthesis (MPS) when paired with whey protein. As we know, muscle protein synthesis is vital to build and repair lean muscle and being able to amplify it X2 takes IsoWheyMax to the next level! A small 2g dose is what has been clinically shown to create this profound environment; the dose that is in IsoWheyMax. This also means that, with improved muscle protein synthesis, you won’t have to worry about your body wasting that precious protein and not having it be absorbed after those tough workouts. Deliver more protein to your muscles and enhance your body’s ability to create new muscle with Velositol™️

DigestivMax-100mg: DigestivMax is a blend of Papain & Protease enzymes that aid in better digestion of protein and nutrients. Papain is a digestive enzyme that helps break proteins down into peptides and amino acids. Protease does the same thing, but also has other properties such as blood clotting and cell division. Both of these combined can play a huge role in protein digestion and assimilation, and can almost entirely eliminate bloating, stomach issues, and other GI issues some experience after consuming protein shakes and high protein meals.

Price Point: If you head over to Performax Labs website, you’ll see that you’re getting about 28 servings for $39.99. However, code PMAX20 at checkout takes 20% off your entire order bringing your total down to about $32! At around $1 per serving for 24g of high-quality whey isolate, digestive enzymes and Velositol to increase muscle protein synthesis, it’s a hard deal to pass up! 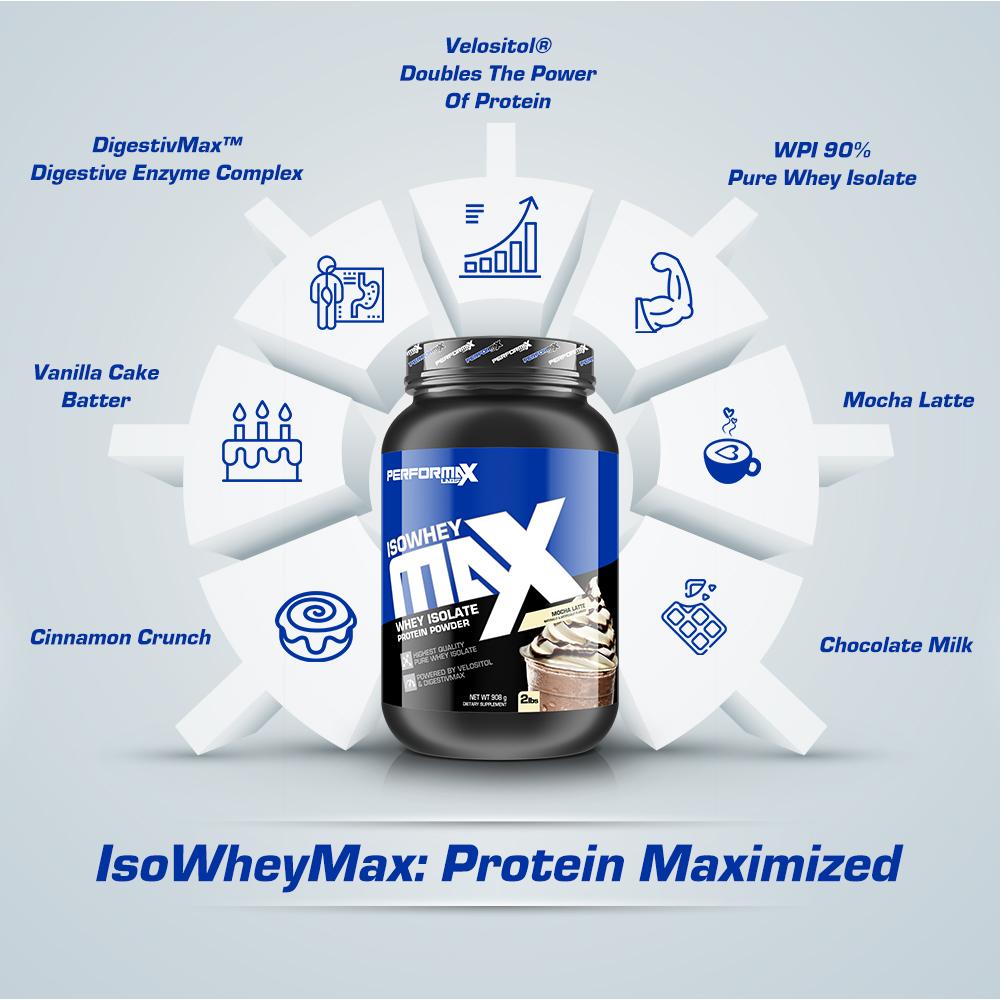 Our Thoughts: What’s not to love about IsoWheyMax? Performax Labs has once again changed the industry standard for what makes a quality product. Their formula has gone above and beyond traditional protein powders and has fantastic flavors and mixability to boot. With 24g of protein and added Velositol and DigestivMax, IsoWheyMax is one of the top formulated protein powders on the market! We have loved using Performax labs’ IsoWheyMax over the last month and we think you will too! We recommend trying the Cinnamon Crunch and Mocha Latte and letting us know your thoughts on it! Once again, Performax Labs has outperformed and out formulated the competition. Head over to PerformaxLabs.com and pick up their first protein powder to hit the market in 2020, IsoWheyMax!